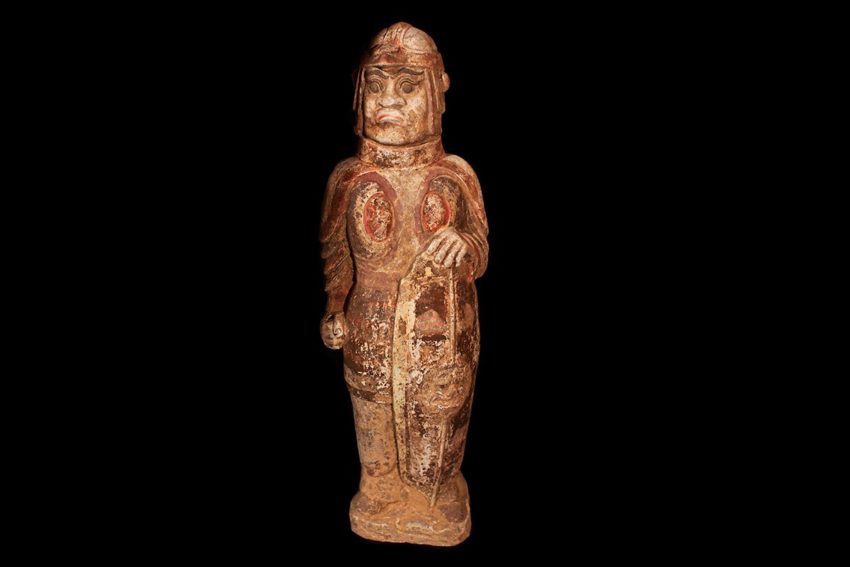 Even fifteen hundred years ago, defense and protection were essential.  By 386 CE, China was deeply divided by multiplewarring territories; a nearly four hundred years-long peace was shattered, and the previous period of artistic expansion and philosophy was over.  All parties had declared their independence, breaking away—politically and geographically—from China’s unified governmental leadership.  The period of the Wei dynasty was represented by such an exodus.  The new era of extreme discord continued for over one hundred and fifty years.  China was not actually unified again until 556 CE, when the Sui dynasty began reunification efforts.

The cultural material protected within the ancient tombs reflects the change from peace to war, and then to the restoration of relative peace.  This superb figure of a warrior is from the Wei dynasty, a period when ceramics and other art works were not produced in great quantity. Weapons were the primary items of importance during that time, making this piece extremely rare.  This Wei dynasty warrior is depicted in leather battle attire and possesses a full body shield.  This would suggest that the individual was a foot soldier, who would have fought hand to hand, rather than from horseback.

In the center of the shield is a “mask” of a fierce being, meant to give the soldier metaphysical protection, thus going beyond the physical protection of his shield.  The importance of this figure would be as a protector of the deceased, to make sure his journey into the afterlife was successful.  This soldier is one of many ancient figures held by the Pamplin Collection.