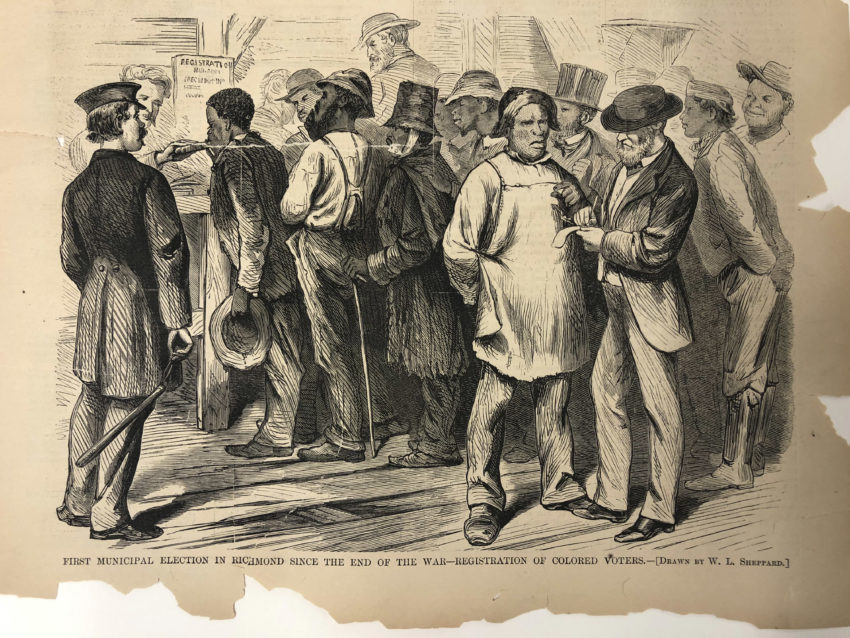 This is a page of a lithograph from the June 4, 1870, edition of Harper’s Weekly showing black men lining up to register to vote in the first municipal elections in Richmond, Virginia, since the end of the Civil War. Subtitled “A Journal of Civilization,” Harper’s Weekly was a published out of New York City from 1857 until 1916. It featured foreign and domestic news, politics, fiction, humor, and illustrations, including the works of cartoonist Thomas Nast. It was particularly noted for its biting political cartoons and powerful photographs depicting slavery and the Civil War. Possibly the most widely read publication during the war, the journal supported Abraham Lincoln and, subsequently, Reconstruction and the Republican Party of President Ulysses S. Grant. In the decades of the late 19th century, Harper’s Weekly supported civil service reform, low tariffs, and the gold standard.

The document is one of several thousand held by the Pamplin Collection that illuminate social, political, and military life in the United States during the Civil War era.

RECONSTRUCTING VIRGINIA, a website project of students in 2017 at the University of Richmond, https://reconstructingvirginia.richmond.edu