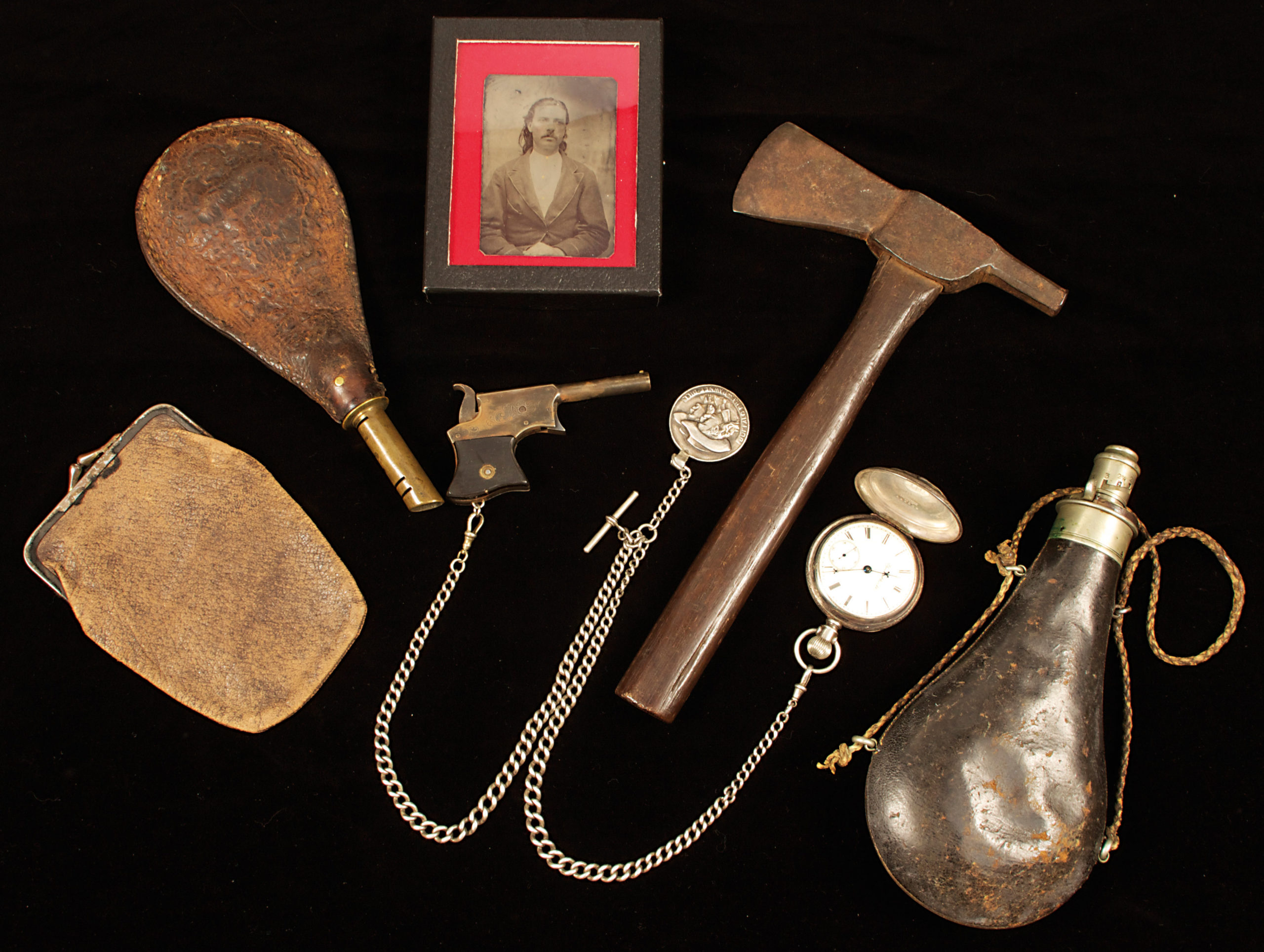 One of the West’s great iconic artifacts, this pistol belonged to Bob Dalton at the time he attempted the famous Coffeyville, Kansas, bank robbery. On October 5, 1892, Dalton and other members of his gang stormed the C.M. Condon & Company’s Bank and the First National Bank in Coffeyville. Members of the town responded with vigilance, killing four members of the gang, including Bob and his brother Grat. The Pamplin Collection also holds Frank Dalton’s pistol, along with the guns of other infamous outlaws.

W.F “Buffalo Bill” Cody plays a significant part in the Pamplin Collection, with several personal items, publications, and promotional materials from his Wild West shows. The half-dozen objects shown here include  (left to right) a possibles bag, shot flask, a photo of Cody as a young man, a presentation watch-and-chain with pistol, tomahawk (claimed to have been taken from an Indian during Cody’s brief days as a pony express rider) and powder flask. Frank Hopkins’ presentation double vest-pocket chain with Remington pistol, pocket watch and Wild West Show medallion date from the 1880s.  Hopkins was the famous endurance rider (and subject of the movie, “Hidalgo”) who raced his western-bred mustang (named “Hidalgo”) 3,000 miles in 68 days across the Arabian Peninsula against 100 Arabian horses and desert riders. Presented to Hopkins by Buffalo Bill and Pawnee Bill, the pistol is a German copy of a small-caliber Remington and is engraved “Frank Hopkins” across the top. It is attached by the chain to an Elgin-made watch with a Hunter case.  On the face of the watch is the bust of Buffalo Bill and Pawnee Bill. The same faces are on the face of the medallion, on the reverse of which is engraved, “From Col. W.F. Cody & Maj. G.W. Lillie, To: Frank Hopkins.”

An 1875 Remington pistol, one of only 1,000 manufactured for the U.S. Army that year.  Seven hundred and fifty of these guns were shipped to the 7th Cavalry, whence they were carried west to the Indian wars. Many, including this one, were lost on the battlefield at Little Bighorn.  Carved on the handle of this gun is the word, or name, “KID.” We believe that this pistol was brought from the Little Bighorn battlefield and traded among various Indians until it made its way to New Mexico where it then could have been ultimately “acquired” by Billy the Kid, making this pistol one of the most iconic weapons of the American West, with both Custer and Billy the Kid connections. The Pamplin Collection also owns numerous items that belonged to the famous lawman Sheriff Patrick Garrett, who killed Billy
the Kid..

Above is a deputy sheriff’s badge (ca. 1900) from Los Angeles County. Below is a standard pair of iron and leather North & Judd spurs that once belonged to Wyatt Earp (1848-1929), buffalo hunter, deputy sheriff, and U.S. marshal in Dodge City and Tombstone. Upon retirement, Earp moved to Hollywood where he worked in the fledgling movie industry.