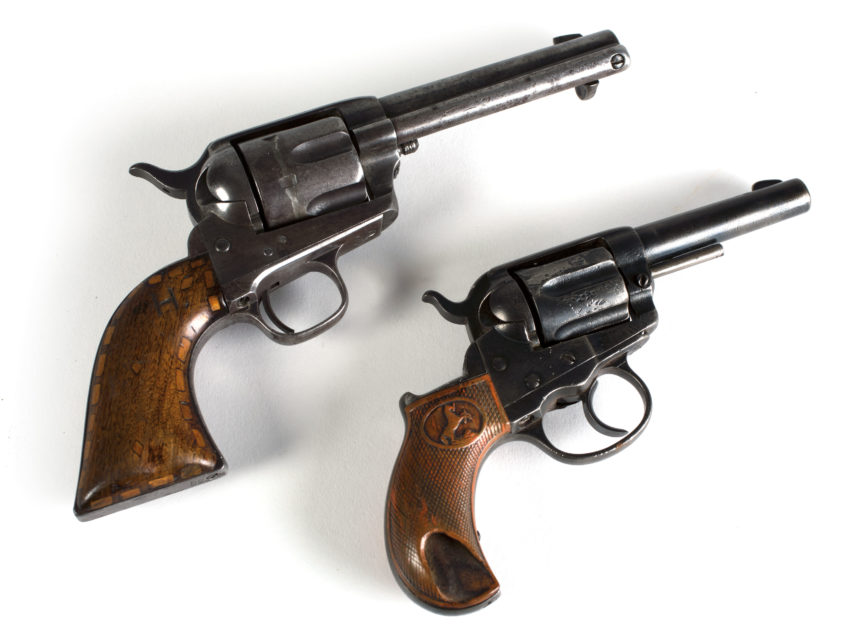 Newspaper (Sunday Mirror) announcing the 1937 death of Emmett Dalton, the last of the famed Dalton Brothers who robbed the Coffeyville, Kansas, banks in 1892. Emmett survived the shootout, served time in prison, then had a career in the early movies.

Photograph of Emmett Dalton, lying wounded, following the raid on the banks in Coffeyville.

Photograph of Mexican revolutionaries fighting under the command of General Pancho Villa, 1915.

List of witnesses, including Frank Dalton, of the infamous Dalton Brothers.

Posse Comitatus document—from “Hanging Judge” Issac Parker’s courtroom signed by famous US Marshal and Confederate General James Fagan, 1874—attesting to the sale of liquor to the Indians by a white man.

Pistols, 1884 Colt single action .44 cal revolver.  Heart and Diamond and Spade of clubs along with the initial “H” carved right side grip.  Possibly a gamblers pistol. John Slaughter Pistol. Red Bakelite handle with horse embossed on each side of handle.  John Slaughter was a Civil War veteran, Texas Ranger, sheriff, Arizona state legislator, and gambler. Recognized for “cleaning up” the Arizona Territory and admired by Bill Hickok, Wyatt Earp, Billy the Kid, and Pat Garrett, among others.